VAX014 is a novel rBMC-based oncolytic immunotherapy designed to have distinct advantages over traditional and emerging oncolytic virotherapies. Vaxiion is leveraging these advantages to develop VAX014 as a best-in-class locally administered oncolytic therapy. The advantages of VAX014 over currently available oncolytic viral agents stem primarily from our novel approach to oncolysis in combination with a more immunogenic vector that has limited vulnerability to the innate immune system following local administration. With respect to oncolysis, VAX014 is highly differentiated and improved from oncolytic viral therapies by virtue of the fact that VAX014 delivers a pre-formed oncolytic protein toxin to facilitate oncolysis.  This novel oncolytic protein, called perfringolysin O (PFO), works immediately upon intracellular release from VAX014 (complete oncolysis occurs within 1 hour in vitro​). This is in stark contrast to oncolytic viral therapies, which are dependent upon successful completion of the viral lifecycle to exert their oncolytic mechanism. Paradoxically, viral replication and completion of the viral lifecycle are negatively impacted by a potent innate antiviral response after administration. Unlike oncolytic viruses, VAX014 does not rely on replication to initiate oncolysis and circumvents the innate antiviral response altogether. Equally important, the rapid oncolytic action of VAX014 instead ensures the presence of tumor antigens at the height of the innate response.

VAX014's ability to specifically target both alpha3beta1(α3β1) and alpha5beta1 (α5β1) integrins facilitates broad spectrum activity against various solid tumor types because these two integrin family members are clinically validated as being selectively expressed or overexpressed in a wide variety of solid tumor indications (and most mouse models).  More information on the role of these integrins in cancer and the rationale for targeting them with VAX014 can be found here.

Vaxiion has two wholly-owned oncology programs centered around VAX014 - one in bladder cancer and another in patients with advanced solid tumors.

The company is finalizing a second IND for the intralesional treatment of advanced solid tumors with a target submission date of Q3, 2021. 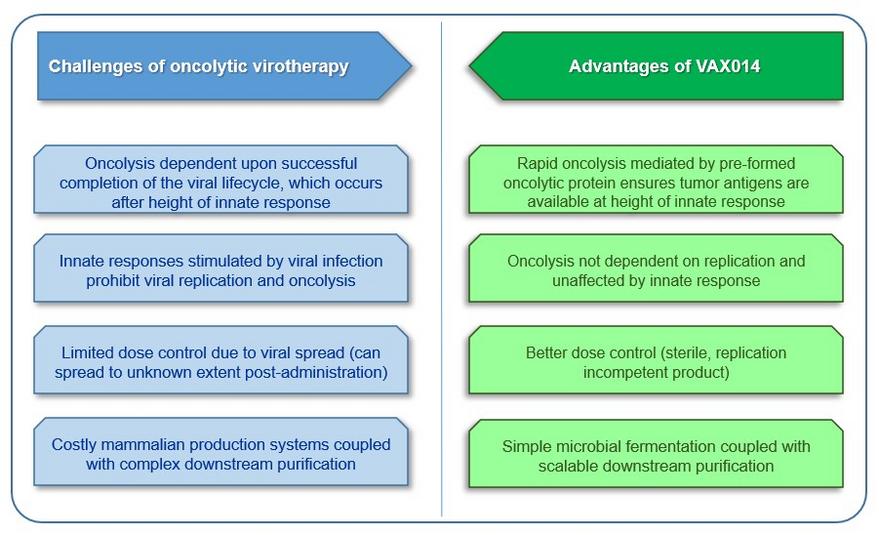 VAX014 is currently being investigated as an intravesical treatment for non-muscle invasive bladder cancer (NMIBC) in a multicenter Phase 1 dose escalation trial (NCT 03854721). Evidence of antitumor activity has been established.